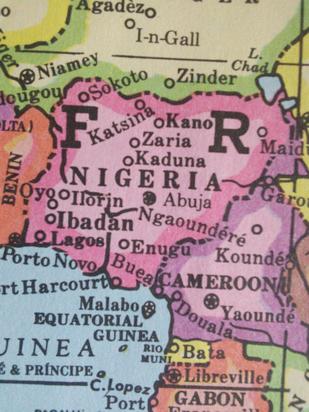 As stated in my books regarding the Igbos, the father of the Yoruba people, Oduduwa traveled with Gad’s sons, Eri, Areli and Arodi from North Africa, likely Egypt and settled in what today is known as Nigeria. This would coincide with Yoruba oral history that they believe to come from outside of West Africa and thus it would be no surprise that we might find Israelites, Hebrews and Jews among the Yoruba.

Oduduwa was said to be a descendant of Hamm, through Nimrod also called Lamurudu, this according to Yoruba Christian Samuel Johnson in 1880. Sultan Bello, Caliph of Sokoto was quoted in 1820 by Hugh Clapperton to have said that the Yoruba people were descendants of a Canaanite tribe.  And S.O. Obiaku a Nigerian Historian claimed the Yoruba’s to originate from the Sudan or what was known as Cush/Kush (Ethiopia).

However, some say “Yoruba” is a corruption of the name “Jacob” or in Hebrew, “Yacob.” Others assert that Yoruba is from “Yerubbaal,” the “People of against Baal.”

But the current Yoruba Jewish population who claim to come from the Israeli tribe of Ephraim was said to have been driven to Yorubaland from Morocco by Muslims and eventually mingled with Yoruba people. These black Jews in southern Nigeria are called the "Emo Yo Quaim", or "Strange People", by the native Africans, but these black Jews call themselves, "B'nai Ephraim" or "Sons of Ephraim". These Jews who claim that their ancestors came from Morocco is supported by their language which appears to be a mixture of Maghrebi Arabic and local Negro speech. Thus abu ("father") has become Yaaba, from the Hebrew word “Abba” and “Umm” ("mother") is “Em” from the Hebrew, "Ima". Nevertheless, most of their language is similar to the Yoruba’s around them.

These Yoruba, “Sons of Ephraim” observe certain Jewish customs, among which are the great holy days, naming of children on the 8th day, etc. In almost every way, these black Jews are like the Yorubas, and are hardly distinguishable from them, except for some outstanding Hebrew observances.

But there is doubt whether any from this group exists today among the Yoruba.


There is a clan among the Yoruba People called the "Ijeeu," which is believed to be a corruption of the word “Hebrew” or “Jew.” They are looked down upon by the rest of the Yoruba for displaying Igbo-like character and traits, one of which is business prowess. There is even a town in Yorubaland called, "Ijuee-Igbo." Much if the Ijeeu people resent and deny this connection with them and Ndi Igbo.