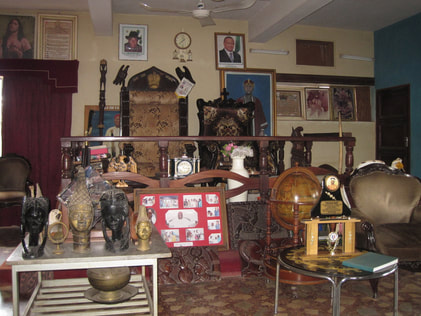 ARGUMENT 3: THE IGBO HAD MANY GODS

It first must be stated, unlike the African tribes surrounding the Igbo, that the Igbos believe in one, all-powerful, all-knowing, pre-existing, indescribable, unseen, invisible God and Creator who is called Chukwu (The Great God) or Chineke (The God Who Creates). A compound name of Chukwu is Chukwu Abiama which means, “The God of Abraham.” Is this not also the description of YHWH God of the Jews and Christians?

There are images missionaries found in Igboland which have been mistaken for idols, when in actuality they were images of ancestors, such as Eri, etc. But there were no images found designated as Chukwu or Chineke. Igbo Nri preists have confirmed this by first deeming there is no God but Chukwu Abiama and that the images represent the Igbo ancestors because before the white man, there was no photography and the carved image was the way the Igbo preserved the image and memory of their ancestors.

Some claim that Eri was a minor deity of the Igbo. We see that it is mostly foreigners commenting on the Igbo who misinterpreted Eri as being a god and mostly not the Igbo themselves.

I am not denying that paganism was never a part of the Igbo people. Just like Israel when they entered the Promised Land and failed to expel all the Canaanite nations before them who eventually became their downfall and divine reason for expulsion from the Land through the Assyrian and Babylonian Captivities. Likewise, the further the Igbo, who were descendants of Gad, Judah, Levi and various other Israeli tribes, got from Israel through time and distance the easier it was for some Igbo to fall into forms of paganism. Outsiders who witnessed this, as well as misunderstood the various image of Igbo ancestors that they had seen erroneously wrote and taught that the Igbo had many gods and the Afro-centric pseudo scholars have monopolized on these facts to perpetuate their falsehoods and agenda.

Today in Igbo culture, images are rarely used, because of the advent of photography; photos have now taken the place of carved images in obi’s (Igbo shrines). This is similar to the board of names with a light bulb beside each name found in Jewish synagogues today. It is believed that Chukwu heeds those who honor and respect their ancestors who have gone on before to be with Him. Sadly, this has been mistaken by missionaries and anthropologists as idol worship or at best ancestral worship.

Some have mistook the word “Chi,” equivalent to the Hebrew word “El” meaning “God,” to be one’s “personal deity” instead of recognizing that “Chi” means that Chi/Chukwu is personable to them. It literally means “My God.” So in other words, Chi means that each Igbo person has a personal relationship with Chukwu.

Chi also brings the connotation of “life” or “life force” and is very much like the Hebrew word for life which is Chai.

True, paganism and false gods have been found among the Igbo but only as a result of being influenced by other tribes which were their neighbors. Even this should cause us to connect the Igbo to Israel because why was Israel exiled out of the Land in the first place? Because of their inclination toward idolatry.

I should also mention here what is in Igboland is called the Ikenga which is likened unto the angels on the Ark of the Covenant or one’s own guardian angel. In Judaism, as in Igbo culture, one’s home (obi) is considered a temple, modelled after the Tabernacle or Temple in Jerusalem; it is not uncommon to see replicas of what is found in the Tabernacle/Temple such as Menorahs or even images of angels. Angels were in the Temple, In the Igbo obi there is an image called the Ikenga and it is a type of guardian angel mistaken by outsiders as one’s personal household deity.

The angels in the Jerusalem Temple were made of aromatic cedar overlaid with gold. The Ikenga is usually made from the ogirisi tree, sacred to the Igbo, which is an aromatic evergreen tree. The Ogirisi are also used as grave markers.