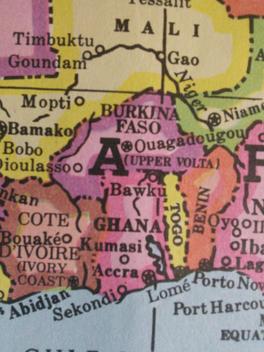 The Sefwi of Ghana, a people of approximately 1500, who reside in the southwest mountainous region of the country, bordering Uganda, about 400 miles away from Ghana’s capital Accra, are believed to be Jews from the post second Temple era.

They had always kept Kosher, eating only chicken, sheep and goats. They do not eat cattle because they said 400 years ago in Mali they, being Jews, were forbidden to have cattle and thus eventually forgot how to properly slaughter them according to kosher law. They also circumcise their males on the 8th day, rested and worshiped on Sabbath (Saturday), and separated their menstruating women. They also celebrate a feast that resembles Passover.

The Sefwi Jewish “New Adiembra” village of 300 or so are called by the surrounding peoples, “the proverbial wandering Jews.” The Sefwi believe that they come from ancient Israel and first came to Mali 400 years ago and then proceeded to the Ivory Coast and then 150 years ago settled in Ghana.

In fact, the Sefwi believed they were the only Jews left on earth until a Jewish Sefwi man in the 1980’s traveled Accra and inquired at an embassy if there were any other Jewish peoples in the world. By this he was put in touch with the Israeli Embassy and the Sefwi and the Israelis have had a working relationship ever since. Through the support of a Jewish synagogue in Iowa the Sefwi Jewish community is now thriving.