There has been much debate and much controversy regarding the results of the DNA testing on the Igbos by Rabbi Jonathan Bernis' group Jewish Voice International which denies the Igbos are of Jewish descent. I reject these supposed finding and stand firmly with the assessment made by a dear friend and brother and Igbo scholar Remy Ilona .

"When I read in some online newsletters some months ago that some “Jewish scientists” arrived Nigeria, to test the DNA of the Igbo people for “Jewishness”, I was not amused, because I know that there is no DNA test for “Jewishness.” Little probing revealed that whom one of the newsletters, the ‘Authority’ called Jewish scientists were members of the American messianic group called Jewish Voice International. These coupled with the fact that no important and duly registered newspaper carried the news stirred my interest. I decided to follow the exercise and know how it would end. I gathered that the religious body Jewish Voice collaborated with a Nigerian religious group called, Redeemed Israel Community of Naza­renes Association (RI­CON) on this exercise. They got saliva samples from both states that Igbos are native to, and states that Igbos are not native to for the tests. According to Isaac Ojo, writing for the Authority newsletter of 27th February 2017, and quoting the RICON DNA Committee Secretary Win Gozie Aguh, “………. specimens of males were randomly selected from nine South East and South South states where the Igbos are found.” The states are, according to Ojo, citing RICON,  “ Abia, Anambra, Enugu, Ebonyi, Imo, Delta, Cross Rivers, Akwa Ibom and Rivers States.”  It is important to note the following: Igbos are not native to 2 of the states; are not majorities in two others, and in the five which they are the solid majority and are native to, non Igbos also reside.

These set off alarms. Has DNA tests which determine Jewishness been developed? Are members of Jewish Voice “Jewish scientists” or “Israeli scientists” as they are also addressed by the newsletters that carry their activities in Nigeria? Why did RICON get samples from non Igbo areas and claim that it got Igbo samples? I decided to await the outcome of the testing.

DNA screening is not new to the Igbo. I have had my DNA analyzed, because I wanted to know if my genes would show connections to the Middle East, where I believe that the Hebrew religion and culture which closely resemble my Igbo culture and religion originated. My result which I shall attach to the bottom of this article shows a Middle Eastern connection. Deeper study of the data reveals that my genes, you might say ancestors, were at the Red Sea. Some other Igbos have had theirs analyzed, and the results are similar to mine.

After five months, the “Jewish scientists”, using the words of the Authority newsletter of August 7, 2017, arrived in Nigeria and announced their findings. According to the Authority, “The International President of Jewish Voice Ministries, Rab­bi Jonathan Bernis, announced that the result of saliva samples taken in Nnewi had shown that the Igbo were not Jews…….The Israeli in company of three of his compatriots said that none of the 124 specimen taken from Nigeria matched the samples in the Houston labora­tory which has 17 years’ experience in DNA business.”

Continuing, the Authority reported that Bernis noted, “however ….. that the result does not rule out the claim of Igbo to Israeli descent as more research would still be made to authenticate the claims.”
Relying on what the newsletter cites Bernis as having said, his findings raises only questions and produced no answers. How did Jewish Voice’ partners determine who was Igbo when they selected their subjects as they got specimen from people who are native to clearly non Igbo territory, from their own admission? Did Jewish Voice verify that the specimens in the laboratory that tested its ‘Igbo’ samples belonged to people who did not convert to Judaism?  A convert to Judaism is as Jewish as someone who has been Jewish for 1000 years, but the person who converted may not have genetic connections to the Middle East as I have, if the person’s gene pool has no Middle Eastern connections."

Further another good friend and brother and eye witness to these events, Rabbi Gavriel Ogugua points out  further mishandling of the revealing of the findings...


"I have to make some comments about what happened at Nnewi when the President of Jewish voice international Rabbi Jonathan Bernis read the so called DNA test results to the RICON group. I was there live!! My first comment is that the historical fiasco that took place there could have been mitigated and a rebuttal made if the handlers of the gathering observed proper protocols and decorum. The likes of Bishop Orizu (I wonder how Jews get ordained as Bishops!) and Moreh Abraham Ndukwe; President and Secretary of RICON respectively, derailed any opportunity for an intelligent rebuttal. They foreclosed all attempts from the audience including me to make a comment on the subject even though Rabbi Bernis had indicated he is open to receive questions and comments. That is a big protocol breach for a gathering such as that. Secondly both Orizu and Ndukwe are clueless when it comes to issues surrounding DNA tests and the "Politics" overt and covert that are involved. Those that would have been able to offer credible opinions were sidelined due to issues of ego and personal aggrandizement! Why were no Igbo experts in DNA or Igbo elites present at such a gathering? Your answer is as good as mine.......... petty squabbles and inordinate ambition for lime light! The issues involved are bigger than RICON since the greater Igbo issue is at stake. Dr. Ikedife who provided his clinic in Nnewi for the DNA test was not present and President Orizu used two thirds of his welcome address berating the well respected doctor for strying to steal his thunder from the previous visit of Jewish Voice to Igboland. That was very unfortunate and in bad taste. Instead of devoting his welcome address on the topical issue at hand by preparing the minds of his audience for the announcement of the results (a proactive leader should have anticipated a potential negative fall out in situations like that), and by so doing weigh the pros and cons issues of such impact on the audience present and the general Igbo community. Thirdly after the deed was done (I mean the DNA announcement debacle) It did not occur to President Orizu and Secretary Ndukwe that there is something called "Damage Control" in situations like this. To allow many Igbos who gleefully gathered that day to confirm what their ancestors have told them, and what some of them have spiritually known and lived over many years ago to go away without a proper rebuttal was to say the least callous, ill-informed and mediocre! No wonder the press corps had a field day sensationalizing the announcement without informing their listening or reading audience about the "other matters" that were contained in the result report establishing that this test cannot be conclusive and somewhat subjective since it is based on limited DNA pool. What are the lessons to be learned from the mistakes and what is the way forward? As in all scientific inquiry, this result must become a thesis that must produce anti-thesis for further research. The proverbial garbage in garbage out data handling or mishandling is very obvious in this test. One cannot compare apples and oranges! This begins the greater question of what is the difference between a Jew and a Hebrew? Are there any known pool of "Known Hebrews" anywhere in the world to compare the Igbo samples with? If none, now is the time to create them. After all we are told that the Jewish DNA pools were created a little less than twenty years ago! I remember when I visited Israel and while at the wailing wall (Kotel), the presiding Jewish Rabbi at the sacred place spotted me in the crowd and came out to welcome me and a brief conversation like this ensued between us: Rabbi to me; Shalom, what is your name? My answer; Gavriel. Rabbi; that is a very powerful name, do you know the meaning? My answer; Yes I do. Rabbi; Where are you from? My answer; Florida USA. Rabbi; No I mean where were you born? My answer; I was born in Nigeria from Ibo tribe and Gad was my ancestor. Rabbi; Great! So when are you going to make Aliya? (Aliya means return to the land of Israel from the diaspora). My answer It is in HaShem's hand! Now I butted in and asked him this: Rabbi what is your name? He answered; My name is Rabbi Yahoshua; I am the Rabbi at the wailing wall. Bingo! I ran into his waiting arms in a very deep and warm embrace............... and we lived very happily together since then. Folks, this Rabbi did not do any DNA test on me before he approached me and the friendship and conversation ensued. My point: DNA TEST OR NO DNA TEST...... Am Israel Chai!! I knew this before I first went to Israel by Divine revelation (A story for another day). Thank you for allowing me offload what is on my mind. Shalom Alechiem!!" 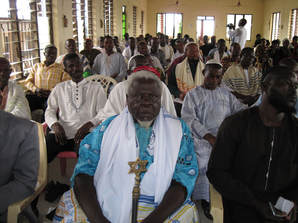 A large portion of this subject I dealt with earlier under the heading “Black Hebrews, Jews and Israelites.”  This sets us up very well for us to discuss actual genetics; DNA.

In the article “Population Genetics Reveal Shared Ancestry: DNA Links Modern Europeans, Middle Easterners to Sun Saharan Africans” on Science Daily May 14, 2011. This article springs from HMS Associate Professor of Genetics, David Reich and his paper intitled, “The History of African Gene Flow Into Southern European, Levantines and Jews,” published by PLoS Genetics. Genetic data from 40 populations across Africa, Asia and the Middle East assisted by doctoral student Prya Moorjani and Assistant Professor Alkes Prices used the genetic roll off method to find Sun-Saharan African ancestry with West Eurasian DNA approximately 1,600 years ago. In this online article it says, “A diverse array of Jewish populations can date their Sub-Saharan African ancestry back roughly 72 generations, on average, accounting for 3 to 5 percent of their genetic makeup today.” Also stated was that African and Jewish populations mixed during the Jewish diaspora in the 6th to 8th century B.C.