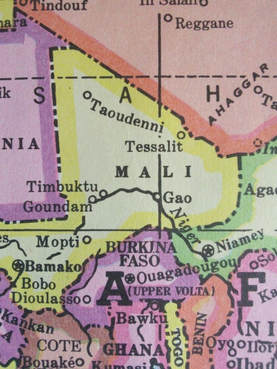 The Jews of Mali, sometimes referred to as “Zahkor,” meaning, “Remember,” are descendants from Egyptian and Saharan Jewish traders.

“In the eighth century A.D. the Rhadanites (multi-lingual Jewish traders) settled in Timbuktu and used it as a base from which they could solidify their trade routes through the desert. In the 14th and 15th centuries Jews fleeing Spanish persecution settled in Timbuktu. Members of the Kehath (Ka'ti) family founded three villages that still exist near Timbuktu -- Kirshamba, Haybomo, and Kongougara. In 1492, King Askia Muhammed took power in Timbuktu and threatened Jews who did not convert to Islam with execution. Some Jews fled, some converted, some remained in Mali and faced centuries of persecution and the occasional massacre. By the 20th century there were no practicing Jews in Mali.” - http://www.mindspring.com/~jaypsand/timbuktu2.htm

The “Zahkor” movement in Mali made up of about one thousand people, was founded in Timbuktu in 1993 by the Malian historian Ismael Daidé Haïdara. His followers claim to be the offspring of Saharan Jews.

“In a manifesto published in 1996, the members of Zakhor recognize themselves as Jews and declare themselves to be descendants of the Jews of Touat. The Touat, the region at the limit of the Sahara in western Algeria, was, up to 1492, inhabited by Jews involved in trans-Saharan trade. At that time, Sheikh Abd el Krim el Meghili, a scholar and a mystic, exterminated them and ordered the destruction of their synagogues at Siljimassa and Tamentit.” - http://www.jewishvirtuallibrary.org/jsource/judaica/ejud_0002_0021_0_21377.html

Sadly many have fled the region due to Islamic persecution and some who were not able to escape succumbed to forced Islamic conversions.