argument 6: Lies of the Elders 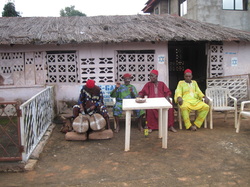 It has been proposed by some that the Igbo Elders are either lying about Igbos being Hebrews or that they hiding something, or they have been influenced by white men to say Igbos are Hebrews.

First of all, what would the elders have to gain by perpetuating a lie in which they would never live to benefit from, and what would be such a benefit, from what I can tell because of such claims by the Igbo they have been shunned and persecuted by others.

Second, this belief was held long before white men ever met the Igbo and those that did, observed how like ancient Israel they were and the missionaries would not voice this fact to them for fear of losing converts. And what benefit would white men gain by getting the Igbos to promote their Hebrew origins.

To propose the elders have themselves conspired to perpetuate a lie to the Igbo people is preposterous and holds no water.

Does this mean that the elders do not keep secrets, of course they do. They keep certain knowledge hidden as all elders in all cultures do until there are those worthy to be initiated into the eldership so as to pass such information along.

Why is certain knowledge withheld? For safety sake, for certain knowledge in the wrong hands can be deadly. For example, fire has many benefits but can also be a destructive force. One would not allow an infant to play with matches, no; an elder withholds the knowledge of how to produce fire until the child is of a responsible age so as to handle such knowledge with great respect and care. Similarly, elders withhold certain information until there are those who come along that are worthy and responsible to receive it. This does not mean the elder lie and are responsible of perpetuating a conspiracy against their own people.

Another example is in Judaism, the knowledge of esoteric matters, mysticism; kabbalah is withheld from one who has been raised in the Jewish tradition until 40 years of age. Because only a ripe and mature mind can handle such knowledge. A story goes that 4 men studied kabbalah and only one out of the four became a righteous man. The others either, went insane, became a blasphemer or an apostate. So one can see the reason that certain knowledge is kept under lock and key by the elders, but to say that knowledge is harmful and conspiratorial is ludicrous and offensive.