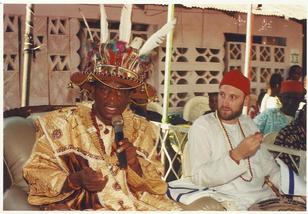 During the reign of King Saul, Gad defected and swore their allegiance to David in Hebron. So Gadites were among David’s royal guards and his “Mighty Men.”

I Chron. 12:8-15, 37-38 And of the Gadites there separated themselves unto David into the hold to the wilderness men of might, and men of war fit for the battle, that could handle shield and buckler, whose faces were like the faces of lions, and were as swift as the roes upon the mountains; Ezer the first, Obadiah the second, Eliab the third, Mishmannah the fourth, Jeremiah the fifth, Attai the sixth, Eliel the seventh, Johanan the eighth, Elzabad the ninth, Jeremiah the tenth, Machbanai the eleventh. These were of the sons of Gad, captains of the host: one of the least was over an hundred, and the greatest over a thousand. These are they that went over Jordan in the first month, when it had overflown all his banks; and they put to flight all them of the valleys, both toward the east, and toward the west… And on the other side of Jordan, of the Reubenites, and the Gadites, and of the half tribe of Manasseh, with all manner of instruments of war for the battle, an hundred and twenty thousand. All these men of war, that could keep rank, came with a perfect heart to Hebron, to make David king over all Israel: and all the rest also of Israel were of one heart to make David king.

We find they joined their camp and East Jordan Brothers, the Reubenites in their war against the Hagarites.

I Chron. 5:10, 18-22 And in the days of Saul they made war with the Hagarites, who fell by their hand: and they dwelt in their tents throughout all the east land of Gilead… The sons of Reuben, and the Gadites, and half the tribe of Manasseh, of valiant men, men able to bear buckler and sword, and to shoot with bow, and skilful in war, were four and forty thousand seven hundred and threescore, that went out to the war. And they made war with the Hagarites, with Jetur, and Nephish, and Nodab. And they were helped against them, and the Hagarites were delivered into their hand, and all that were with them: for they cried to God in the battle, and he was intreated of them; because they put their trust in him. And they took away their cattle; of their camels fifty thousand, and of sheep two hundred and fifty thousand, and of asses two thousand, and of men an hundred thousand. For there fell down many slain, because the war was of God. And they dwelt in their steads until the captivity.

Gadites trusted GOD in battle (I Chron. 5:18-22 key verse 20) and we learn that they were excellent archers and swordsmen and were depicted as lions (I Chron. 12:8, 5:19-22), perhaps referring to their hair and beard but their ferocity in battle as well.

We see they were defeated by the Syrian King.

2 Kings 10:32-33 In those days the LORD began to cut Israel short: and Hazael smote them in all the coasts of Israel; From Jordan eastward, all the land of Gilead, the Gadites, and the Reubenites, and the Manassites, from Aroer, which is by the river Arnon, even Gilead and Bashan.