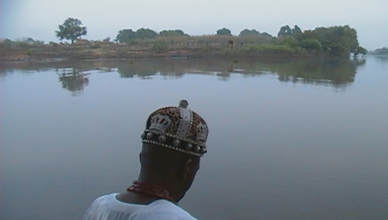 We also read about the petition to settle on the East side of the Jordan.

Num. 32:1-5 Now the children of Reuben and the children of Gad had a very great multitude of cattle: and when they saw the land of Jazer, and the land of Gilead, that, behold, the place was a place for cattle; The children of Gad and the children of Reuben came and spake unto Moses, and to Eleazar the priest, and unto the princes of the congregation, saying, Ataroth, and Dibon, and Jazer, and Nimrah, and Heshbon, and Elealeh, and Shebam, and Nebo, and Beon, Even the country which the LORD smote before the congregation of Israel, is a land for cattle, and thy servants have cattle: Wherefore, said they, if we have found grace in thy sight, let this land be given unto thy servants for a possession, and bring us not over Jordan.

Deut. 3:12, 16-17 And this land, which we possessed at that time, from Aroer, which is by the river Arnon, and half mount Gilead, and the cities thereof, gave I unto the Reubenites and to the Gadites… er Arnon half the valley, and the border even unto the river Jabbok, which is the border of the children of Ammon; The plain also, and Jordan, and the coast thereof, from Chinnereth even unto the sea of the plain, even the salt sea, under Ashdothpisgah eastward.

In the following Passage we are given territorial boundaries of Gad during the time of Joshua and the Judges.

Josh. 13:24-28 And Moses gave inheritance unto the tribe of Gad, even unto the children of Gad according to their families. And their coast was Jazer, and all the cities of Gilead, and half the land of the children of Ammon, unto Aroer that is before Rabbah; And from Heshbon unto Ramathmizpeh, and Betonim; and from Mahanaim unto the border of Debir; And in the valley, Betharam, and Bethnimrah, and Succoth, and Zaphon, the rest of the kingdom of Sihon king of Heshbon, Jordan and his border, even unto the edge of the sea of Chinnereth on the other side Jordan eastward. This is the inheritance of the children of Gad after their families, the cities, and their villages.

Gad held land from the bottom of the Sea of Galilee to almost the Northern tip of the Dead Sea. Some of their major cities included; Lo-Debar, Jabesh-Gilead, Peneul, Mahanaim which was a Levitical City (Josh. 21:7) and also the place where Jacob once was and had a vision.

And Jacob went on his way, and the angels of God met him. And when Jacob saw them, he said, This is God's host: and he called the name of that place Mahanaim. – Gen. 32:1-2

Other cities with in the Territory of Gad was; Ramoth-Gilead which was a City of Refuge (Josh. 20:8-9, 21:38). Jazer, Succoth and Abel-Shittim were Gadite cities as well.

Gad, being a mighty “troop” voluntarily and covenantally agreed to fight west of the Jordan on behalf of the other tribes who have not yet secured their allotment of inherited land. Gadites are like the Royal Marines of Israel, they are the first to be called into battle, they are on the front lines of the fighting (Josh. 4:12).

Josh. 22:1-8 Then Joshua called the Reubenites, and the Gadites, and the half tribe of Manasseh, And said unto them, Ye have kept all that Moses the servant of the LORD commanded you, and have obeyed my voice in all that I commanded you: Ye have not left your brethren these many days unto this day, but have kept the charge of the commandment of the LORD your God. And now the LORD your God hath given rest unto your brethren, as he promised them: therefore now return ye, and get you unto your tents, and unto the land of your possession, which Moses the servant of the LORD gave you on the other side Jordan. But take diligent heed to do the commandment and the law, which Moses the servant of the LORD charged you, to love the LORD your God, and to walk in all his ways, and to keep his commandments, and to cleave unto him, and to serve him with all your heart and with all your soul. So Joshua blessed them, and sent them away: and they went unto their tents. Now to the one half of the tribe of Manasseh Moses had given possession in Bashan: but unto the other half thereof gave Joshua among their brethren on this side Jordan westward. And when Joshua sent them away also unto their tents, then he blessed them, And he spake unto them, saying, Return with much riches unto your tents, and with very much cattle, with silver, and with gold, and with brass, and with iron, and with very much raiment: divide the spoil of your enemies with your brethren.

Now we see a totally different territory and land allotment for the tribes in Ezekiel 48 Which speaks of the millennial reign of Messiah before the coming of the New Heaven and New Earth and here we see Gad’s allotment is West of the Jordan in the south below the Dead Sea with a  very important place being Tamar.

From the east side unto the west side, Gad a portion.  And by the border of Gad, at the south side southward, the border shall be even from Tamar unto the waters of strife in Kadesh, and to the river toward the great sea. – Ezek. 48:26b-27

When Messiah Yeshua re-gathers all the Tribes of Israel, the Tribes will settle in their Ezekiel assigned settlements in the Promised Land. From North to South the allotments are; Dan, Asher, Naphtali, Ephraim, Reuben, Judah, Levi occupying a place between Judah and Benjamin, then we have Simeon, Issachar, Zebulun and Gad. This order does not correspond to any known previous order of the Tribes such as in the encampments, marches, Levitical Breastplate, the New Jerusalem Gates, etc.

And he provided the first part for himself, because there, in a portion of the lawgiver, was he seated; and he came with the heads of the people, he executed the justice of the LORD, and his judgments with Israel.  – Deut. 33:21

It should be noted here that the mystical phrase which is underlined in the passage above, “a portion of the lawgiver,” has a fascinating interpretation in regards to the Gadite land Ezekiel envisioned. We know one known as the Lawgiver in Israel is Moses and we know Scriptures tells us we do not know the exact location of his gravesite, but tradition says that it is believed Moses is buried somewhere in the Ezekiel’s Territory of Gad!


The Land of the Gadarenes

The land of the GADarenes in the Gospels is Gadite territory. You may recall this is the place where Yeshua (Jesus) cast out the Legion of demons from the man who lived among the tombs and allowed them to go into the herd of swine which them, like lemmings, took a fatal swan dive over the cliff and into the sea where they drown.

There is a preposterous barrage of purposeful misinformation by Jewish Archeologist Simcha Jacobovici to try and plant seeds doubt within the mind of the believer who says Yeshua (Jesus) went to Spain and that is where he cast out the Legion of demons from the demoniac, but if that were so, that would mean the Scriptures are in error and we know the Scriptures are inerrant.

Mr. Jacobovici says that there are three places in Israel which are traditionally said to be the place where Yeshua cast out the demons from the possessed man; Kursi, Hippos and Gadara. His requirements as he reads these gospel accounts are that there must be cliffs and tombs nearby. Kursi has cliffs but no tombs, Hippos has no cliffs but tombs and though Gadara meets the criteria he says the cliffs are too far away due to Marks account which seems to indicate the tombs and cliffs were side by side. However, cliffs are not a requirement for in the Greek and Aramaic of the Gospels a steep hill is indicated (Matt. 8:32) and not necessarily a sheer cliff as he assumed. He also argues that the boats used on the Sea of Galilee were too small for Yeshua (Jesus) to fall asleep in. But there were yacht-like boats with small cargo holds where on could sleep in. the Gospel accounts indicate that smaller vessels accompanied the larger one Yeshua was in (Mark 4:35-38). The Gospel language in the Greek, Hebrew and Aramaic in Matthew 8:18 clearly indicate the crossing of a small body of water, the “Sea” (really more of a Lake) of Galilee and not the vast expanse of the Mediterranean Ocean!

Some cite the inconstancy of the number of demoniacs Yeshua dealt with, was it one or two? Matthew says two, Mark and Luke only speak of one. The answer is simple, there were two as Matthew said, but the main focus was on only one of the two demoniacs, one was more prominent than the other.

So it is believed that the main demoniac that was dealt with was a Gadite. By this time the tribes have been scattered due to disobedience to the Torah and many of the 10 tribes would have assimilated into the pagan peoples around them, thus living in places where unclean pigs are raised. It is believed that this demoniac was a Gadite because he resided in the Gadite territory of Gadara and that this man was prone to violence as a warrior would be and that his possession was not a simple one, but the demons said, “we are Legion, for me are many,” and recall Gad means troop, or we could say, a legion!

Mark 5:20 says the formerly demon possessed man gave his testimony of deliverance in Decapolis, but didn’t we say he was a Gadarene? Decapolis means, “10 cities,” So Decapolis was a region and not a city itself, but a territory of cities, one of which was Gadara known today as Umm Qais. The other cities of the Decapolis are; Gerasa in Jordan, Scythopolis (Beth Sheam), Hippos, Pella, Philadelphia (Amman in Jordan), Capitolias (Beth Ras), Canatha (Qanawat), Raphana and Damascus.