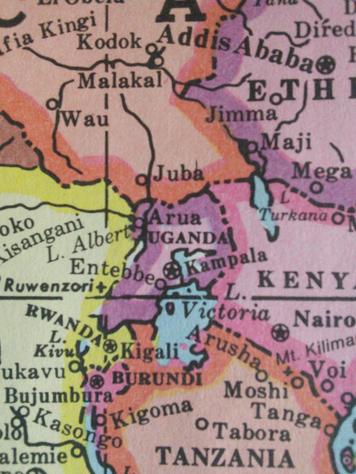 Prior to Israel becoming a world recognized nation in 1948, Jews looking for a homeland were offered a place in Uganda. Surprised? Ancient Jews and Hebrews have passed by there, through the forced expulsions from Israel and surrounding lands and have lived there for thousands of years thus creating a Ugandan national sympathy for the plight of world Jewry in the 1940’s.


In the late 1800’s Semei Kakungulu of the Koki tribe rejected Christianity and Islam to embrace a Messianic or Natsari style of Judaism through the Mbale religious movement founded by Malaki Musajakwa, a former African Protestant Christian. The Malakites illustrates that a Bible dropped in the lap and followed as a whole will naturally produce a Messianic/Natsari form of Judaism. The East African Ugandan Jews call themselves “Abadyudaya” a term which was said to be coined by Kakungulu and thus they follow all the customs and traditions of Judaism. When Christian missionaries tried to get Kakungulu to give up the Jewish faith he had adopted which he incorporated with his belief in Messiah Yeshua he quoted to them Zech. 8:23


"Thus saith the Lord of hosts; In those days it shall come to pass, that ten men shall take hold out of all languages of the nations, even shall take hold of the skirt of him that is a Jew, saying, We will go with you: for we have heard that God is with you."


Implying that the Christian movement was to be an extension of the Jewish faith, which it was not seeing as Christianity by and large reject the Torah which is the Law of God given through Moses.


However, in the 1920’s after Jews got wind of these “Abadyudaya” they began to travel there and dissuaded them from incorporating the New Testament into their practice and beliefs, stating that Jews do not believe in the New Testament.


It is believed that Gad, Dan, Judah and Levi settled in Uganda from which the Abadyudaya eventually emerged.


Rudolph R. Windsor in his book, “From Babylon to Timbuktu” tells us that in Zephaniah’s time (630 B.C.) Ethiopia, Uganda and Kenya were teeming with black Jews and Hebrews.  He goes on to quote the prophet:


From beyond the rivers of Ethiopia my suppliants, even the daughter of my dispersed, shall bring mine offering. – Zeph.  3:10


Rudolph goes on to state that west of Lake Victoria in Uganda, northeast of the Belgian Congo;


“It has an organized native government, with a tradition of thirty-three kings and a legendary line that traces back to King David. It is proud history. The legends tell of the Ugandan people crossing the Nile [remember, beyond the rivers of Ethiopia] centuries upon centuries ago, and subduing all tribes whose country they traversed. They claim the highest native civilization in Africa.” – pg. 79


In the book “Fragile Branches; Travels Through Jews in the Diaspora” by James R. Ross tells of Gershom Sizomu a Ugandan Jewish religious leader who said, “The important recognition comes from God, not individuals…”