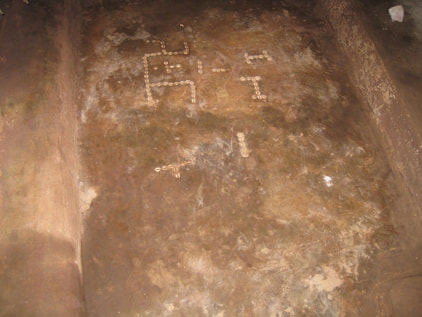 ARGUMENT 2: THERE IS NO ARCHEOLOGICAL EVIDENCE TO INDICATE AN ISRAELI ORIGIN

A good researcher must also be able to read symbols which they may find and know where such symbols originated from. This aids the detective in discovering the truth about a victim or suspect. Sometimes they even have to analyze symbols in order to break a code in order to gain valuable information in their case.

For example, a picture or drawing a snake in one culture may be a symbol of wisdom or eternal life and in another culture it may mean evil, danger or death.

Paleo-Hebrew Script has been found in various places in the Igbo Territories of Nigeria.

Drawings like unto the Mogen David, Star of David have been found in various places of Igboland prior to missionary arrival to Nigeria.


“One scholar who visited Iboland, saw a swastika there and questioned how the Ebos/Hebrews could have this symbol and be Jewish. Sar Amariel answered the question stating, ‘This is an ancient Hebrew symbol that represents the sun…’” – Document: Tabernacle Congregation Prayer Yeshiva to HRM A.E. Chukwuemeka-Eri (Ezerora 34th and KAK Ji Ofor Igbo) King of the Igbos


And indeed swastikas have been found on the reliefs of ancient synagogues in Israel. No wonder the Nazis adopted this symbol to imply they were like the sun and greater that the Star of David.

Equally and obviously cold, hard, tangibly, physical evidence is required to come to solid conclusions in any case a detective may take on.

It has already been mentioned earlier regarding the Stone Throne at Obu-Gad with the Paleo-Hebrew Inscription at the foot of the throne as well as the onyx stone. It is interesting to note that the stone representing Gad (as well as the other Tribes) in the Priestly shoulder stones was made of onyx, which is black (Ex. 39:6-7). In December 1997 a onyx stone found at the palace of Obu-Gad, the traditional site where Gad’s son Eri settled was found an onyx stone that bore the Paleo-Hebrew inscription “GAD” upon it which the King Solomon Sephardic Federation confirmed the authenticity of the inscription.

In time to come your children might speak unto our children, saying, What have ye to do with the Lord God of Israel? For the Lord hath made Jordan a border between us and you, ye children of Reuben and children of Gad; ye have no part in the Lord: so shall your children make our children cease from fearing the Lord. Therefore we said, Let us now prepare to build us an altar, not for burnt offering, nor for sacrifice: But that it may be a witness between us, and you, and our generations after us, that we might do the service of the Lord before him with our burnt offerings, and with our sacrifices, and with our peace offerings; that your children may not say to our children in time to come, Ye have no part in the Lord. Therefore said we, that it shall be, when they should so say to us or to our generations in time to come, that we may say again, Behold the pattern of the altar of the Lord, which our fathers made, not for burnt offerings, nor for sacrifices; but it is a witness between us and you. – Josh. 22:24b-28

In 1917 the British discovered, about 500 feet below the soil on the palace grounds a solid bronze Star of David indicating the Igbo people may have migrated from the ancient city of David. To commemorate this event, Nigerian kobo coins were minted with a Star of David on it.

While attending the Ovala Festival at Obu-Gad in Aguleri at the River Niger where Eri was said to have crossed there is a 12 stone altar built by Eri in the middle of the river that can be seen during the dry seasons when the water is low. This too recalls us to a Biblical passage of striking similarities specifically involving the Tribe of Gad.

Between 1938-1959 Archeologists led by Thurston Shaw at an Igbo-Ukwu excavation near Oaeri town unearthed what is believed to be a mask portraying an Igbo face. Also unearthed were bronze items, pots, bowls, etc., including a pot believed to be used in the coronation of Igbo Kings. Also found were bronze intricate beads that reflected wealth and artistic skill as well as attests to international trade by ancient Igbos. Some archeological dating tests suggest Igbos have occupied Nigeria as early as 3,000 BCE. Radio carbon dating of the objects suggests that Igbos occupied Nigeria before 800 CE. Much of the items found in this excavation seem to have a modified Egyptian design and or influence which would make since seeing as the first Igbo are said to have come from Egypt in the Pre-Exodus-Exodus.

To be sure there are new discoveries here of late that have yet to be studied and analyzed.  Also, we must ask, how much archeological evidence has been destroyed due to the Biafra War and Land Development? So further archeological evidences are bound to become more numerous in the near future.