The Ashanti of Ghana 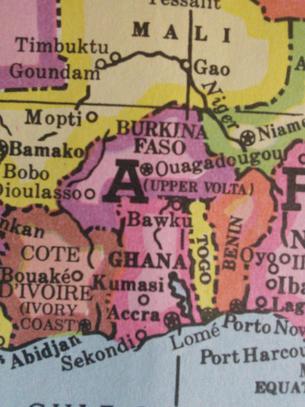 The Ashanti, the predominate tribe in Ghana, formerly known as the Gold Coast is predominately believed to have come from North Africa and many fingers point to Egypt or Assyria.  It has been pointed out by the first white men that came to Ghana and met the Ashanti noted the Egyptian like architecture and design, but just as equally some of these so called Egyptian and or Assyrian traits could also point to a Hebraic origin. For Israel was captive in both places and left an indelible mark on both as well as a little Egyptian and Assyrian influence rubbed off somewhat on Israel. Also noted by such men was the Semitic or Arabic appearance (facial features) of the Ashanti as well as the reddish hue to their brown skin, which is also an Igbo trait which is akin to Adam, whose name means red earth and David who was said to have a ruddy (reddish) complexion and both of which were of a dark complexion to boot. I have already established in my earlier works regarding the Igbo (which I have linked to Gad and other Israeli Tribes) that the first Hebrews and Jews were of a dark and reddish complexion.

African tribal names usually mean, “The People of…” The name Ashanti may come from the Hebrew word “Ashan” meaning, “smoke” which is usually used in the context of the destruction of a city and may hint of the destruction of Israel by the Babylonian and Assyrian exiles or even the Roman ransacking of Israel. There was indeed a town in Judea called Ashan (I Chron. 6:59) corresponding to Joshua 21:6 where the word Ain according to the Jewish Encyclopedia may be a corruption or variant of Ashan. If this all be true it would mean the Ashanti may possibly predominately be Jews (Judah) Levites, Simeonites and Benjamites.

But much of this is still very circumstantial and possibly coincidental, though I myself am not a huge believer in coincidence. Are there more substantial links the Ashanti have with Israel?

Briefly, few striking Hebraic traits that are attributed to the Ashanti are morning baths in the river which is much like mikvah’s (ritual baths/cleansings) by the Jews. Their sanitations laws closely mirror that of what is written in the Torah. They were originally a pastoral people until they were forced to move into the bush, which is similar to what has happened to the Igbos. The selling of prisoners of war as slaves or the enslavement of their fellow man in order to pay off a debt as it is found in the Torah, the five Books of Moses. Also when one dies, the place in which a person has expired is cleansed and locked up for nine days, which is  like how in Leviticus 14 a room is shut up for seven days. They never fought on Saturday (Sabbath) they started their calendar in the fall like Jews and Hebrews. The Ashanti society is a Patriarchal one. There is a stool of authority which is uncannily similar to that of what is called in synagogues as the Seat of Moses and the Chair of Elijah. They practice intra-tribal marriages (Num. 36:5-12). They also had cross-cousin marriages (Num. 36:11-12). The preservation of the family line is of the utmost importance and it is considered a curse if a line dies out or if a woman is infertile, miscarries or a man dies with no sons. This is a very Hebraic trait, for we see the Patriarchs and Matriarchs of Scripture struggled with infertility and the Patriarchs often pleaded to God for sons. So in Israel, the preservation and perpetuation of the family line was very important to them as it is with the Ashanti. The whole process of the rituals and customs surrounding marriage is much like that of How Isaac married Rebecca (Gen. 24), insomuch as we even find a post Temple tradition; a cup of wine is given to the contracting familial parties and the drained cup is then smashed under the feet of the groom. This seems to indicate that if the Ahsanti are indeed Israelites, they come from the post second Temple era, and the Babylonian and Assyrian exile era. An Ashanti mother is separated and considered unclean 8 days after child birth and it is on the eighth day that the child is thus named (Lev. 15:19-29), all as we see are Hebraic customs and laws. Joseph J. Williams, S.J, PH.D, Litt.D. author of “Hebrewisms of West Africa” cites many more evidences, but has an interesting piece on how the Ashanti language is very similar to that of Hebrew and even how the name of their Chief Deity is a corrupted variant of the Hebrew Yahweh (pg. 56-60, 74-76). His book is definitely worthy of a read for more extensive information on the Ashanti. An Ashanti Herald wears a monkey skin cap, which is reminiscent of a Jewish yarmulke or kippah (skull cap).


Some argue that because they do not circumcise they cannot be of Hebraic descent, but Moses did not circumcise his son until God forced his hand and there was a time in the wilderness when Israel stopped circumcisions for a time. Such a ritual can become easily lost due to wanderings and the distance of time, from ones people and into that of another land and culture. Having the naming ceremony on the 8th day seems to be a hint that they used to circumcise their male infants.

Though other gods were recognized in Ashanti religion there was recognized a Supreme Deity called Nyame who was in character much like the Yahweh of the Hebrews. The Ashanti Priesthood had a turban with a circular metal piece very much like the Levitical priesthood that read “Holy unto YHWH.” Not only that, but that had a square, 12 sectioned breastplate, similar to that which was worn by the Levitical priests! The Ashanti priests have a common saying regarding Nyame, “No priest may look upon the face of his God and live.” We find this almost verbatim in Exd. 33:20. It was not forbidden to say God’s Name as it became post Babylonian exile, which could indicate that if the Ashanti are Hebrews/Jews/Israelites, they came to Africa before or during the Babylonian Captivity!

The altar of Nyame is like that of a Hebrew altar, four cornered with a horn protrusion going slightly inward.

As I have noted with the Igbos, paganism is actually an indicator that an African tribe, coupled with other evidences may indicate that they are indeed Hebrews/Jews/Israelites. Why? Because in both the Igbo and Ashanti they not only worshiped a Supreme Deity, the lower gods under Him was sometimes seem more as ambassadors or manifestations of the One Supreme Being and or His attributes, and admittedly some were separate gods in and of themselves, but this should not concern us or surprise us, because Israel worshiped YHWH but in their depravity which caused them to be taken by Babylon and Assyria and dispersed, they worshipped the Canaanite gods of the neighboring peoples.

The greatest of Ashanti gods that was said to walk the earth and be the son of the Supreme Deity is Ta Kora, a type of redeemer which is uncannily similar to the personage of Yeshua (Jesus) the Messiah.

The Ashanti as has been said, starts its year in the fall as do the Jews and has a New Year and harvest festival much like that of the Jewish Rosh Hashanah/Yom Teruah (New Year/Feast of Trumpets, Sukkot (Feast of Tabernacles), there is even a libation ceremony like was done in Yeshua’s day in the Temple, once again possibly indicating that if the Ashanti are Jews/Hebrews/Israelite they likely came to Africa after the Temple was destroyed.

The Ashanti has elephant tusk horns that resemble the shofarim (ram’s horns) blown in Judaism.

There is also a type of Yom Kippur (Day of Atonements) in which the whole nation; land and people, goes through a cleansing and purification ceremony.